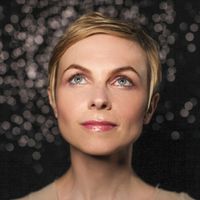 Kat Edmonson is an award-winning songwriter and singer “with an equal foothold in jazz, cabaret and vintage cosmopolitanism pop” (The New York Times). She has been featured on Austin City Limits, Tiny Desk Concerts, A Prairie Home Companion, and The Late Show.

The New York Times describes her music as “fresh as a spring bouquet” while NPR says, “Hearing Edmonson makes it virtually impossible to do anything but stop and listen.”

Raised on the music and film of the early-to-mid-twentieth century, Kat is a rare artist who embodies the spirit of the past while remaining resolutely au courant. She performs original songs and familiar classics in her live show, interweaving humorous anecdotes, philosophical musings, and her love of film with disarming candor and vulnerability. Her longtime band members’ keen and sensitive accompaniment allows Kat to freely veer off-script as she’s often inclined to do

In the winter of 2022, Kat made her theatrical debut in “The Hang”: a new jazz opera by Taylor Mac and Matt Ray. Upon its opening, the off-off Broadway show received “Critic’s Pick” in The New York Times highlighting Kat’s “extraordinary artistry.” About her performance, Vulture praises the burgeoning actress for her “weightless, soaring scat arias,” The Wrap says, “Kat Edmonson emerges as the Teresa Stratus of off-off Broadway.” “The Hang” imagines the final hours of the life of Socrates as he asks his friends to use every moment left to think on virtue.